Our Bees Are Vanishing

Our Stories and Closing Statement

Bees. We love them, we hate them, we love to hate them, but we can’t deny the importance of them in agriculture. Humanity is growing more and more each day. Our population has overgrown and it has forced farmers into an industry that has slowly become unsustainable, which has caused the decline of bee populations. With the decline of these pollinators, we will lose our already scarce food supply and our ability to grow food to feed our families will suffer.

Imagine going to the grocery store wanting to buy a pack of strawberries, but you can’t. It’s $35, and there are only a few of them there. That’s because the bees are not around to pollinate those strawberries. Imagine a world without carrots, broccoli, raspberries, and other crops that we take for granted – because that’s what will happen if these insects go extinct. The use of certain pesticides and insecticides has killed these pollinators that are so essential to our food production. Legislation should implement protection for the bees to prevent wrongful killing by exterminators, bee sprays, and the pesticides put on crops every day. In addition, information should be provided to the general public so that they are aware of the best practices surrounding bee conservation.

Our Bees Are Vanishing

There are an estimated 4,000 species of bees native to North America. They span the entire country, and are responsible for maintaining the balance in nature which affects every aspect of our lives. Honey bees have been in serious decline in the United States for more than three decades. It is our goal to ask Rhode Island to take the decline of these bee populations more seriously and work on efforts in reducing our use of harmful pesticides while increasing education on strategies to help the community contribute to the effort.

Bees produce our food by pollinating the plants, which include almonds, kale, cherries, watermelons and basically all flowering fruit. Pollination is the transfer of the male parts (pollen) to the female part of the plant (stamen), which often cannot be done on the same plant and requires assistance. In order for our food, such as fruits and vegetables to grow, there needs to be fertilization of the plants. If the bees are all dead we will lose ⅓ of our food source as bees are a major contributor to the pollination process, a struggle we are already facing with our growing population.

There is no efficient or cost effective form of “artificial pollination” that has been successfully modeled as it is a tedious process that requires the small appendages of a bee. Bees are attracted to bright flowers that many of our fruits and vegetables provide. Between 2001 and 2009, the value of these types of pollination-reliant produce increased from $10.69 billion in 2001 to $15.12 billion by 2009. University of California conducted a study in 2011 that estimated that wild bee species add $0.9 billion to $2.4 billion per year in value to California’s agriculture through pollination services.  This means that if this trend continues, such pollination-reliant produce will continue to increase in value and cost, making them more expensive than many people can afford. Especially considering the value these bees contribute to agriculture in California now, if bee populations continue to decrease, farmers will lose out on the benefits provided by the bees and will have to make up these losses by more expensive measures that will, again, hurt the consumer in the long-run.

Without bees, plant pollination would be significantly inhibited. Biodiversity would plummet, and our food sources would quickly dwindle to nothing. Just three months after the last bee went extinct, the farmers would be experiencing record low harvest yields, and would in turn flip the food economy completely upside down. There are so many things that we take for granted when buying groceries; an example being the low prices of apples, or the healthier alternative of almond butter. All of these products are a luxury built on the back of the bees. The USDA estimates that bees contribute $11-15 billion worth of work for farmers every single year.1

A major problem contributing to bee decline is the overuse of pesticides, insecticides, and herbicides. Although pesticides are meant to keep crops in good condition, they kill insects and other pests while also being extremely deadly to honeybees attempting to pollinate the plants. A large portion of the bee population is affected by Roundup weed killer. This weed killer contains glyphosate which is commonly used on farms and in home gardens.1,2 It disrupts bee gut enzyme reactions, effectively killing them. Roundup has recently been found to be harmful to bees, as well as humans. At the end of March 2019, Roundup’s parent company, Bayer, lost a $80 Million lawsuit for causing lymphatic cancer in humans[1]

Another problem is the steady decline of honey bee colonies, both naturally and artificially due to colony collapse disorder. This is the result of many environmental factors and imposed stressors such as the overuse of pesticides. Colony Collapse Disorder (CCD) can be identified by signs such as rapid loss of adult worker bees, few or no dead bees found in the hive, presence of immature bees (brood), and small cluster of bees with live queen present.2

As CCD becomes increasingly common, this produces a multitude of problems economically as well as nutritionally. As bee populations decrease, less flowering produce is pollinated which results in decreased biodiversity in nature as well as of products available for purchase. This has an especially large impact on low income families who already struggle to afford nutritious and healthy food options such as fresh produce. This will ultimately create a socioeconomic crisis as a bigger divide in health and nutritional access forms between low income and upper middle class families.2

[1] Bees would benefit from regulations on specific pesticides known as neonicotinoids, of which there are five varieties that are all harmful to bee populations. France has banned all five varieties — clothianidin, imidacloprid, thiamethoxam, thiacloprid and acetamiprid– for use on outside and greenhouse crops. The European Union has banned the first three. We request that Rhode Island Legislators consider these bans, as there are effective alternatives to neonicotinoids, one example being [2] Chlorantraniliprole, which is commonly used as a weed remover on grasses. Chlorantraniliprole is much safer for bee populations. Neonicotinoids have been proven to drastically diminish bee population and many countries have chosen to ban it, including the European Union, with little to no effect on crop production.  There are only benefits to gain from banning neonicotinoids and requiring that farmers utilize bee friendly pesticides.

Alternatively, several European countries have already implemented policies to add a surcharge to the sale of various types of pesticide. France, Denmark, Sweden, and Norway have been the first to apply this tax, citing the dangers they pose to the health of human beings and the wildlife with which these pesticides come into contact[3]. The benefits of incorporating this type of legislation into the state would include the substitution of chemical insecticides in agriculture for more organic alternatives, thus the protection of the pollinators that are endangered by them. Taxation of these pesticides would likely be best applied as a per millilitre tax on the sale of these chemicals, meaning that the agriculturists who purchase these would pay the set rate based on the quantity of pesticides purchased, rather than a fixed wholesale tax.

This information should be made available to local communities by posting in small businesses, handed out as flyers, as well as being posted on the Rhode Island Environmental Page. If more people are informed about the importance of bees, they might be willing to make small contributions to their conservation.  These can also be applied to parks in Rhode Island, especially planting flowers and gardens.

[2] “How to Save the Bees.” The Honeybee Conservancy, Digiprove, thehoneybeeconservancy.org/how-to-save-the-bees/.

[3] “How to Save the Bees.” The Honeybee Conservancy, Digiprove, thehoneybeeconservancy.org/how-to-save-the-bees/.

[4] “How to Save the Bees.” The Honeybee Conservancy, Digiprove, thehoneybeeconservancy.org/how-to-save-the-bees/.

[6] “How to Save the Bees.” The Honeybee Conservancy, Digiprove, thehoneybeeconservancy.org/how-to-save-the-bees/.

Our stories and closing statement

While reducing pesticide use– specifically neonicotinoids, and glyphosate, containing weed killers– may not end all of our problems, it is important for Rhode Island to decrease its role in the killing of honey bees, so that other, larger states may follow suit. It is also important that the community is educated on the benefits of local honey, strategies to increase bee populations, and what steps individuals can take to preserve the habitat that are vital to both bee and human survival.  Not only will the bee population be impacted, but so will the human population if we do not take action to start saving these endangered pollinators.

For more information regarding this advocacy contact URI Honors students: 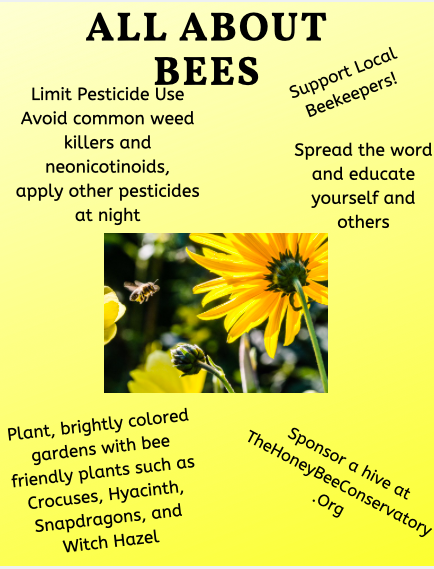 [6] “How to Save the Bees.” The Honeybee Conservancy, Digiprove, thehoneybeeconservancy.org/how-to-save-the-bees/.

[7] “How to Save the Bees.” The Honeybee Conservancy, Digiprove, thehoneybeeconservancy.org/how-to-save-the-bees/.

[8] “How to Save the Bees.” The Honeybee Conservancy, Digiprove, thehoneybeeconservancy.org/how-to-save-the-bees/.

[10] “How to Save the Bees.” The Honeybee Conservancy, Digiprove, thehoneybeeconservancy.org/how-to-save-the-bees/.